Home News Brief of Koka Katsitadze, the Head of the Special Investigation Service

Brief of Koka Katsitadze, the Head of the Special Investigation Service

A senior detective of the 4th Division of Old Tbilisi of the Tbilisi Police Department, the Ministry of Internal Affairs, was detained yesterday by the Special Investigation Service for the negligent killing of a young man in Tskneti.

Based on the currently obtained evidence in the caseand the information provided by eyewitnesses, on the evening of April 18, 2022, the head of the 4th Old Tbilisi Division of the Tbilisi Police Department and a detective of the same division were relocating by car to Tskneti during which the head of the department was given the information via mobile phone about possible illegal acquisition-preservation of drugs near Lado Gudiashvili Street. Arriving at the place, they encountered a parked taxi, near which a young man was looking for something deeply on the ground. As soon as an unidentified item was taken, a man was quickly approached by the gun equipped police detective who declared that he had been arrested. The young man swallowed an item taken from the ground and attempted to escape, at which point a police officer tried to restrain him and accidentally shot him with the gun,as a result the young man died.

The Special Investigation Service carried out urgent investigative and procedural actions on the case. In particular, the scene was inspected, from which the research samples, required for the examination, were taken out.

The police officers, eyewitnesses of the incident and the people living nearby have been examinated and the weapon of evidence has been taken out, after which the police officer was arrested.

To ensure an effective investigation, the Service continues to carry out all necessary investigative and procedural actions in an intensive mode.

To answer questions of interest to the investigation, Forensic, biological, chemical, ballistic, tracing, and dactyloscopy examinations are scheduled. 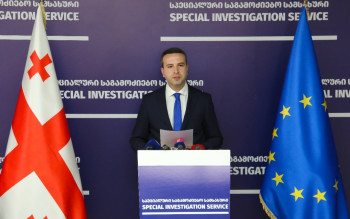