Koka Katsitadze presented the main achievements, challenges and results of the Investigation Service to the members of the higher legislative body, the representatives of the diplomatic corps, the international organizations, the Public Defender's office of Georgia and the CSOs/NGOs.

Since 1 March  2022, the Service has been investigating not only the facts of ill-treatment committed in the exercise of official powers, but also the crimes against human rights and freedoms, which deals with freedom and inviolability of human privacy, obstruction of journalism, persecution and restriction of freedom of speech..

In the presented report, the Head of the Service emphasized the results of the investigation carried out by the Service and the steps taken in terms of institutional development.

Since the activation of the Special Investigation Service, all employees were given the opportunity to continue their work and  have been appointed to the equal positions.

According the presentation, with a view  to ensuring geographical accessibility, effective management and fulfillment of the objectives of the investigation, three new units were added to the Service: the Second Unit of East Georgia (located in Tbilisi), as well as, the Kakheti and Samegrelo-Zemo Svaneti Units and the heads were selected by the investigators and employees of the service through the internal transparent competition.

According the decision of the Head of the Service, taking into account the existing budget funds and functional workload from 1 March 2022, the salary of 20 positions has been increased.

In his speech, Koka Katsitadze paid special attention to the statistical data of the investigation and the number of opened cases of the ill-treatment committed by law enforcement officers and the crimes against human rights and freedom.

According the presentation,  in spite of the significantly increased workload and fewer human resources, during the reporting period, the service recieved 1,267 case reports and  launched investigations into 246 cases; as a result of the investigation, out of the 34 persons subjected to the criminal prosecution and 16 of them were public servants and 18 were citizens.

The Head of the independent Investigation Service drew attention to the statistical indicators of the substantiated proposals submitted to the General Prosecutor’s Office of Georgia, which represents the exclusive mandate given to the Service by the law and plays an important role in the process of independent investigation.

Koka Katsitadze presented Investigation Quality Monitoring and Analytics Department of the Service, which was established within the framework of the 2022 National Action Plan for the Implementation of the EU-Georgia Assossiation Agreement, in June, 2022 and based on the open competition it was staffed with qualified personnel. The Department should supervise timely, effective and professional investigation of the criminal cases; monitor the protocols of investigative actions and other procedural documents; provide an analysis of the practice of the European Court of Human Rights, develop all relevant recommendations/guidelines and monitor their implementation; assess and evaluate performance of the investigators annually and analyze their workload.

In compliance with the presentation of the Head of the Special Investigation Service, an unprecedented decision was made regarding the involvement of victims in the investigation process. Based on the recommendations of the European Court of Human Rights with the involvement of human rights organizations, the protocol on familiarization with criminal case materials and provision of information to the victims of torture/ill-treatment was developed and successfully implemented.

In his speech, Koka Katsitadze highlighted the importance of the close cooperation with the Parliament of Georgia, the international organizations, the diplomatic corps, the Public Defender's Office and other various public agencies.

He also emphasized the issue of fulfilling the obligations within the 12-point plan of the European Commission and the proposals that the Special Investigation Service has already addressed to the Parliament of Georgia.

The Head of the Special Investigation Service focused on the new branding strategy of the Service and open and transparent communication with the public and the media. 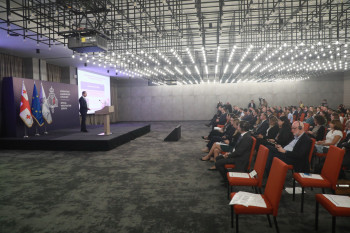