Home News The Briefing of Ketevan Tetrauli, the investigator of the most important cases of the Special Investigation Service

The Briefing of Ketevan Tetrauli, the investigator of the most important cases of the Special Investigation Service

As a result of the conducted investigative actions, the Special Investigation Service solved the fact of the murder occurred during the fight between the prisoners in the penitentiary institution.

Acoording the result of the investigation, on July 26, 2021, the verbal altercation between the prisoners (I.Ch.and S.A.) of the Penitentiary institution No. 17, turned into the physical confrontation.

During the conflict, with the motive of revenge and the intention of killing S.A., the prisoner exposed in the crime, tied him up and slammed him hard on the metal-framed table and floor.

As a result of the violence, the prisoner received non-life-threatening injuries in different parts of his head and died a few minutes after the incident, in the medical center of the penitenciary institution No. 17, despite the medical assistance.

The samples of the biological material, the swabs and other physical evidences were removed from the scene of the accident.

About 100 people were interviewed, including employees of the special penitentiary service, prisoners, medical experts and other persons in contact with the case.

In order to verify the investigative version, an investigative experiment was conducted at the Penitentiary Institition No. 17. The records of the surveillance video cameras were requested from the Special Penitentiary Service. The forensic-medical, the complex genetic-biological, the microparticle, the dactyloscopic,the trasological and the medical-criminological examinations were conducted at the "Levan Samkharauli National Bureau of Forensic Examination".

After obtaining the important evidences, in order to determine the actual circumstances of the murder, the indictment was issued against the accused prisoner for committing the crime under Article 108 of the Criminal Code of Georgia. 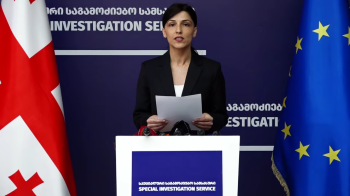