Statement of the Special Investigation Service

Back to News
On August 20, 2022, the Special Investigation Service launched an investigation into the fact of damage of health of the prisoner at the Center For Mental Health And Prevention Of Addiction.

The Special Investigation Service has inspected the scene, the necessary samples for further research have been taken, the law enforcement officers are being interviewed and the video recordings depicting the incident have been obtained.

Based on the materials available to the investigation, the following facts were established: in the morning hours of August 20, 2022, during the handover hearing, the convicted prisoner G.S. approached an employee of the Main Division of Escort and Special Events of the Penitentiary Department of the Special Penitentiary Service from behind, took out the employee’s official firearm and fired one shot without direction, followed by the second shot toward the employee of the Escort Division (no one was injured in the incident). Later, the prisoner inflicted an injury on his head from the same gun.

The injured person was sent to the Caucasus Medical Center, where he underwent a surgical operation.
The Special Investigation Service will conduct all necessary investigative and procedural activities within tight deadlines. The Service will also examine the legality of the activities of the law enforcement officers involved in the incident.

The service expresses its readiness to fully ensure the involvement of the family members of G.S. in the ongoing investigation and to introduce them to both the video recordings of the incident and the criminal case materials.

The case is being investigated under the Article 342, Section 2 of the Criminal Code of Georgia, which implies neglect of official duty resulting in grave consequences. 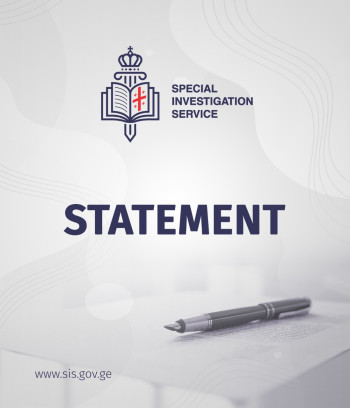